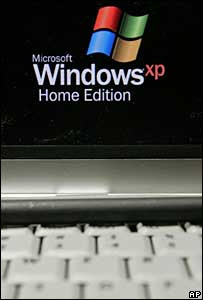 Windows XP will stop being available on new PCs from the end of January 2008.

Microsoft is keeping to a plan to stop selling the operating system even though surveys show a lukewarm response to Windows Vista among consumers.

A poll by US market research firm Harris Interactive found that only 10% of those questioned were planning to upgrade to Vista in the near future.

All versions of XP, including those made for media centre or tablet PCs, are affected by the decision.

Microsoft has confirmed that from 31 January 2008 large PC makers, such as Dell, HP and Toshiba, will no longer be able to buy licences for the software so they can install it on new machines.

Windows XP is being retired to make way for Windows Vista, the consumer editions of which were launched in Europe on 30 January.

However, a poll released in early April suggests that Vista has yet to win over significant numbers of potential customers.

The study of 2,223 web-using Americans found that although 87% had heard of the operating system only 12% of those who knew of it were planning to install it. read full story