Dravid The Wall with Statistics 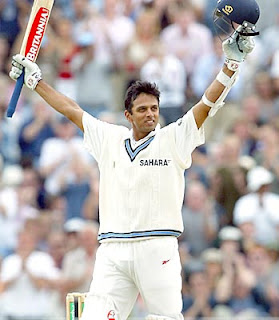 Having celeberated his 35th birthday[11/1/2008) away from his motherland, Dravid can certainly look forward-back on his many milestones that have quietly slipped into the record books, just like himself. Simple and unassuming. Not for him the brouha that others evoke from a lopsided media.

His accomplishments to list a few are awesome. He is one among the only three batsmen to hit Test centuries in four consecutive innings. The other two are Jack Fingleton and Alan Melville. Dravid achieved this by getting scores of 115, 148, 217 and 100* in three successive matches against England and one against the West Indies in 2002. In 2006, he scored at least a fifty in seven consecutive Tests, which bettered the previous Indian record of 50+ scores in six consecutive Tests for a single batsman. This record was shared by Vijay Hazare, Chandu Borde, Sunil Gavaskar, Dilip Vengsarkar and Sadagoppan Ramesh. He is currently second among batsmen who have scored most away runs in Tests (5843). Only Sachin Tendulkar has scored more away Test runs. Dravid’s average is also the highest among all batsmen who have scored 5000 runs in away matches.

He has scored nearly 23% of the total runs put up by India (with a batting average of 102.84) in the 21 Test matches won under Ganguly's captaincy. This is the highest percentage contribution by any batsman in Test cricket history in matches won under a single captain. He holds the distinction of being the first Indian to score five double-hundreds, each bigger than the previous (200* vs Zimbabwe, 217 vs England, 222 vs New Zealand,233 vs Australia, 270 vs Pakistan). He is also the first Indian to score a century against every Test playing nation. He has been involved in the highest partnership away from home for any wicket for India with vice-captain Virender Sehwag of 410 runs vs Pakistan at Lahore in 2006 (the highest partnership between a captain and the vice-captain).He was the fastest to reach 9,000 runs in Test cricket. In all, he took 176 innings to do this, bettering the previous record set by Brian Lara, by one innings.

He holds the world record of not being dismissed on duck for 120 consecutive ODI innings. He is the only batsman to have been involved in two ODI partnerships exceeding 300 runs and was involved in all three highest fourth wicket partnerships for India against South Africa, two with Yuvraj Singh. He has been involved in the highest partnership in the history of ODI cricket with a 331-run partnership along with Sachin Tendulkar againsts New Zealand at Hyderabad in 1999-00. The third highest number of fifties, after Sachin Tendulkar (87) and Inzamam-ul Haq (83). And finally, to sum it up, he was the second batsman after Mark Waugh to score back-to-back hundreds in the World Cup. He was involved in the first 300-run partnership in a World Cup match along with Sourav Ganguly in the 1999 World Cup match against Sri Lanka at Taunton. He was the leading run scorer in the 1999 World Cup with 461 runs.