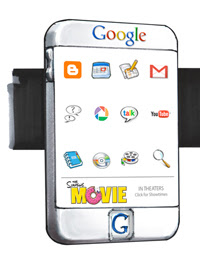 It's a big week coming up in the Mobile Web world. The annual Mobile World Congress is being held in Barcelona, 11-14 February. The early buzz is around Google's much (and oft) rumored GPhone. According to the Times Online, Google "is expected to produce a prototype mobile handset" at the show. Even if Google itself doesn't unveil a phone, there will be plenty of Android prototypes on display (Google's open source Mobile Operating System).

CNN is reporting that "as many as one dozen handset makers and chip companies are expected next week to unveil mobile phone prototypes designed to operate with Google Inc.'s (GOOG) new Android software platform".

We'll just have to wait and see if Google itself comes out with a phone, although our network blog last100 speculated recently about a potential partnership with Dell. Check out a classic last100 post from last August if you're interested in some visual concepts on what a Gphone may look like! Read More>>