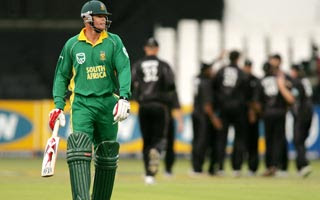 South Africa all-rounder Shaun Pollock was 'emotionally drained' after bringing the curtain down on his international career by hitting the winning runs against West Indies.

In a rain-affected game in Johannesburg, the Proteas won by eight wickets to seal a 5-0 series success, but all eyes were on Pollock in his final international game.

"I would like to thank South Africa Cricket for giving me the chance to represent such a passionate nation," he said. "It's been a wonderful journey.

"I feel emotionally drained. At all of the five venues I've played my last five games, the supporters at every ground have carried me through."

Pollock, who was named South Africa's joint man of the series alongside JP Duminy, paid tribute to his Proteas team-mates, saying: "It's been fantastic.

"We've made some wonderful friendships and we've played some awesome cricket over the years.

"Things are looking very good and I'm sure we'll go from strength to strength."

Man-of-the-match Herschelle Gibbs, who struck a dashing 102 off 84 balls to help his side reach a revised target of 211 from 31 overs, said Pollock had been an ambassador for South African cricket.

"He's not only a role-model for everyone, he's a legend of the game and a true gentleman.

"I'm just happy he could bow out the way he should."

Captain Graeme Smith revealed the series had been emotional for the whole squad.
"It's been heavy but it's been great," he said. "It was something special to be a part of."

He also paid tribute to the crowds, who turned out in their numbers to say goodbye to Pollock.

"The emotions they've shown Shaun have been unbelievable and we'd like to thank them."

West Indies skipper Dwayne Bravo added: "Congratulations to Shaun Pollock on a successful career and I wish him all the best."

He admitted injuries had hamstrung his side's efforts in the series.

"Injuries were big setbacks for us and we were always on the back foot," he said.
"I must give credit to the guys who stepped up to the plate. I'm so proud of the guys."