Ishant is a dangerous bowler: Ponting 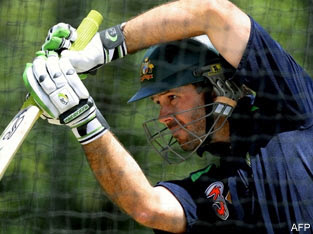 Australian captain Ricky Ponting conceded on Sunday that his tormentor Ishant Sharma is a "dangerous bowler" but stopped short of rating the Indian attack as the best he has seen in home conditions in the recent past.

"Ishant has done well in the latter half of this tour so far. He is a dangerous bowler," conceded a sombre Ponting.

"Sreesanth has also looked good but it's too early to say this is the best attack seen in Australian conditions for sometime now as England was here last year," he said.

The young Indian attack, led by Sharma, booked Australia out for 159 in 43.1 overs after Ponting had chosen to bat first at the Melbourne Cricket Ground today. The Aussie skipper was suitably impressed.

"He is different in the sense that he hits the deck hard and gets some inconsistent bounce. I don't know whether it's because he changes his action.

"He looks dangerous and would be even more to the left-handers. Even to the right-handers, the kind of in-swing he manages is a bit unusual," Ponting said.