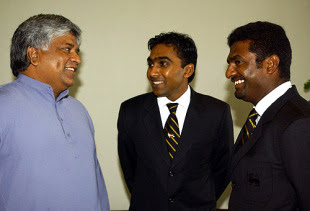 Arjuna Ranatunga, the Sri Lanka Cricket (SLC) chairman, has revealed his board has no money left and is banking on financial support from India to stay afloat.

Ranatunga, who was appointed head of SLC by the country's President Mahinda Rajapakse earlier this month, said the board was surviving on bank borrowings.

"We are now surviving on a six-million dollar bank overdraft," Ranatunga told AFP in an interview this week. "We also plan to ask for a short-term loan from the Indian cricket board to be set off against some of our future tour revenues."

Allegations of kickbacks have dogged Sri Lanka's cricket administration for years and Ranatunga has asked a team of auditors to investigate the board's finances. SLC wasn't short of sponsors after they won the World Cup under Ranatunga's captaincy in 1996, but the kitty has been running dry in recent times. read full story