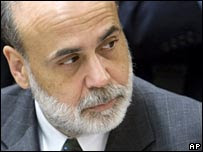 Federal Reserve chief Ben Bernanke has said that the outlook for the US economy in 2008 has worsened.

His comments in Washington come after leading investment banks warned that the US was heading for a recession.

However, Mr Bernanke said the central bank was willing to act in a decisive and timely manner to ensure the economy remained on an even keel.

Analysts said this was a strong sign that the Fed would cut interest rates again when it meets later this month.

The bank has cut rates three times since last summer, most recently in December to 4.25% - the lowest level in two years.

During his speech on Thursday, Mr Bernanke said the Fed was prepared to "take substantive additional action as needed to support growth and to provide adequate insurance against downside risks". read full story