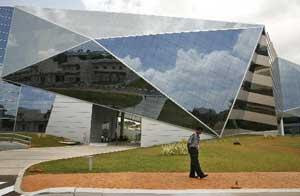 First came orientation at the Hyatt Regency in Burlingame -- name tags for all, a buffet of pasta, sushi and apple pie, the quick rundown on company goals and ethics. Then the recruits prepared to climb aboard three jet airliners for the 30-hour journey to Bangalore, headquarters of their new employer, Infosys Technologies.
``I'm nervous about the flight and I don't know what to expect there -- the weather, the culture, working,'' said Nicole Dun, a 22-year-old San Franciscan embarking on a six-month intensive company training program before being redeployed in the United States. ``Business is global now.''
The summer hiring of 126 young Americans was a validation of sorts for the outsourcing giant, a company that for some in the United States has been synonymous with offshoring and lost jobs.More>> 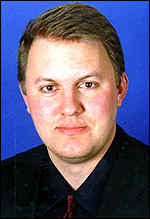 Web browser pioneer Marc Andreessen helped bring the Internet to the masses during the 1990s. Now the Netscape Communications co-founder is trying to help Web surfers build online communities outside the walls of social networking leaders MySpace.com and Facebook.com.

Andreessen's vehicle this time around is Ning Inc., a Palo Alto-based startup that he began in 2005 with former banker Gina Bianchini.

After months of fine-tuning, Ning is finally ready to make its big push with a free toolkit designed to make it easy to launch a social network with a few mouse clicks. Ning's package includes all the social networking staples - videos, photos, music, forums, personal profiles and blogs.

Although both MySpace and Facebook have become smash hits by offering the same features, Andreessen is convinced people dislike the big social networks' one-size-fits-all approach. With Ning's products, even technology neophytes can customize social networks around narrowly shared interests, such as a sports team, church group, hobby or TV show.

"This is the next logical step (for social networks)," said Andreessen, 35, who is Ning's chief technology officer and primary financier. Bianchini, who first met Andreessen while working at another startup, is chief executive.

Ning hopes to make money through a combination of advertising and fees for premium services like extra storage space or bandwidth.

Since he got rich in 1999 when AOL bought Netscape for $10 billion, Andreessen has been scouring for the next big thing with little success so far. He has invested in variety of startups and still serves as chairman of Opsware Inc., a software support provider that has been growing rapidly in recent years but still has accumulated nearly $500 million in losses since its 1999 inception. 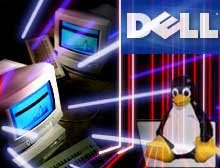 After collecting some 1,800 new product and service ideas from IT users and customers using an online "suggestion box," Dell Inc. has announced that it's taking the user suggestions seriously and will soon debut and sell a new line of certified, user-ready Linux-loaded desktop and laptop computers.
The Dell IdeaStorm Web site, where customers and other IT enthusiasts can offer recommendations about future Dell products and configurations that they'd want to buy, was started on Feb. 16 by CEO Michael Dell, who is looking for ways to re-energize the company's sales and financial performance after several disappointing quarters.
One post that got a lot of interest was the idea that Dell bring back a reasonably priced laptop computer that runs Linux.More>>

Steve Jobs was a college dropout when he teamed up with Steve Wozniak in 1976 to sell personal computers assembled in Jobs’ garage. That was the beginning of Apple Computers, which revolutionized the computing industry and made Jobs a multimillionaire before he was 30 years old. He was forced out of the company in 1985 and started the NeXT Corporation, but returned to his old company in 1996 when Apple bought NeXT. Jobs soon became Apple’s chief executive officer and sparked a resurgence in the company with products like the colorful iMac computer and the iPod music player. Jobs is also the CEO of Pixar, the animation company responsible for movies like Toy Story and Monsters, Inc. Pixar was purchased by the Walt Disney Company in 2006 for $7.4 billion in stock; the deal made Jobs the largest individual shareholder of Disney stock.

Some sources list Los Altos, California as Jobs’s place of birth. However, in a 1995 oral history interview with The Smithsonian, Jobs said, “I was born in San Francisco, California, USA, planet Earth, February 24, 1955.” Jobs was given up for adoption after birth and raised by his adoptive parents in Silicon Valley… His biological sister is novelist Mona Simpson, author of Anywhere But Here.

How often have you seen the chairmen of Wipro and Infosys together? If at all, you can count that on the fingers of one hand. That, too, at very important events or on committees which cannot do without Mr Narayana Murthy and Mr Azim Premji.

How often have you seen the two sit down, either in private or public, for a cup of coffee and chat up. Not once until now. Not until ET got them to do that on a liesurely Sunday morning. The rest, as they say, is history.

We do not want to use adjectives, it was great, or any other devices that English language permits to describe how it went or what they discussed. We bring that extensively for you. If you are impatient to read what they said about the emerging global market place, competition, with others and, certainly, between them, opportunities for the country in many sectors, the admiration and respect they have for each other, you can go straight to the interview .More>>

Top 10 Largest Databases in the World

We all collected things as children. Rocks, baseball cards, Barbies, perhaps even bugs -- we all tried to gather up as much stuff as possible to compile the biggest most interesting collection possible. Some of you may have even been able to amass a collection of items numbering into the hundreds (or thousands).More>>