What's next for Apple? We think it's the remote 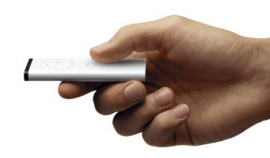 What's one of the most hated electronics on the planet? The universal remote.

While companies like Logitech have made great advances in making these electronics devices easier to set up and use, for the average individual, anything with an LCD screen and more than 10 buttons can be daunting.

Apple, which has a history of making complicated devices a simpler affair, could be the next company to take a stab at dominating the third-party remote control market. The company has a good track record of venturing into fields where others have gone for more, and succeeded in offering less. For example, the iPod's click wheel, which was introduced with the advent of the iPod mini married two sets of controls in one. Also, the mighty mouse--Apple's current pack-in for iMacs and Mac Pro towers took the idea of a multi-button mouse and disguised it as a single button device.More>>