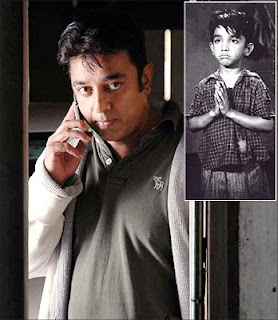 The actor who made his acting debut when he was just six years old has acted in over two hundred Indian films in various languages including Tamil, Hindi, Telugu, Malayalam, Kannada and even a silent film.

Kamal's first film was the 1960 film Kalathur Kannamma, which was directed by Bhim Singh. He played Gemini Ganesan and Savithri's son who later grows up in an orphanage. The role fetched him a National award for best child actor, the first of his four national awards.

Now, 48 years and innumerable awards later, the talented actor is taking on ten roles in his Tamil film Dasavatharam, which incidently was written by him and directed by K S Ravikumar.

In the picture: Kamal in a still from Dasavatharam and an inset of him from Kalathur Kannamma.