HP taking aim on IBM with risky $13.2B acquisition of EDS 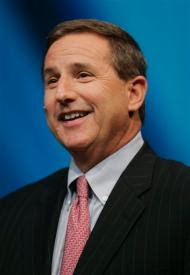 Riding a hot streak that has doubled its stock price in the past three years, Hewlett-Packard Co. is rolling the dice on a $13.2 billion acquisition of technology services provider Electronic Data Systems Corp.

The all-cash deal announced Tuesday represents HP's biggest gamble under the leadership of Mark Hurd, who was hired as chief executive in March 2005 to turn around the Palo Alto-based maker of personal computers and printers.

As Hurd relentlessly cut costs while demanding better execution from the company's remaining workers, HP recovered from a nagging financial hangover that was exacerbated by the biggest acquisition in its 69-year history — the $19 billion purchase of Compaq Computer Corp., completed in 2002 over strident shareholder objections.

Now HP will try to show it learned from its mistakes by making the second largest deal in its history pay off faster.

Investors already are worried that HP is taking an unnecessary risk on EDS, whose disappointing profit margins had caused its stock to drop by about 30 percent over the past year. HP shares sagged $2.56, or 5.5 percent, to finish Tuesday at $44.27.More>>