Kalam gets science museum in his honour 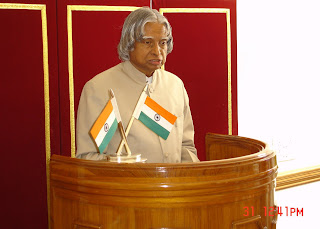 As President APJ Abdul Kalam prepares to demit office, his scientist friends have come together to start a museum that showcases his contribution to India’s space development — and also has a silhouette of his famous mane as its logo.

The Mission of Life Museum in the capital’s cantonment area is the brainchild of Kalam’s friend and Managing Director of BrahMos Aerospace Pvt Ltd, A Sivathanu Pillai.

Through Kalam’s achievements, the museum also highlights the country’s milestones in rocketry, space and missile technology using 3-D holography and even a simulated nuclear explosion.

As Pillai sees it, there could be no better tribute for India’s first scientist president, who was the founder of BrahMos, an India-Russia joint venture for making the supersonic cruise missiles.

“We have reached a stage when the BrahMos missiles have been inducted into the Indian Navy and the Army, so we decided to exhibit the important milestones in our space, nuclear and missile technology (which are closely linked to Kalam),” Pillai said. “It is designed in such a way that the children, who come out of it after visiting it, should have a vision about their life.”

The timing is right too. The museum opens on July 15 exclusively for schoolchildren during weekends, just four days before the new president is elected.

“It has come out as a fantastic museum,” Pillai, who has collected all the medals, honours, certificates and awards Kalam had received, said.

The museum was inaugurated by Kalam himself last month. He has donated his original Bharat Ratna, Padma Vibhushan, Padma Bhushan awards, his 27 doctorates apart from numerous other awards to it. Several dozen mementos and gifts Kalam received during his presidency and earlier are also featured. Besides, the president’s personal ‘Rudraveena’ and Mahatma Gandhi’s marksheet, which was gifted to him by the father of nation’s old school in Gujarat, are there too.