Acquiring US visa going to be easier 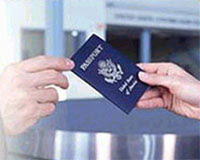 Acquiring a visa for the US is going to be easier from next year when the American missions in the country will have additional facilities in place to cater to the ever-increasing number of aspirants.

The facilities, including additional visa windows, are to be set up in the missions in Delhi, Mumbai and Chennai by the next year, Ambassador David C Mulford said here today.

The number of visa windows in the Consulate in Mumbai is going to be doubled, he said.

Besides, US Consulate will be opened in Hyderabad shortly, he told journalists here while briefing on the all-round growing ties between the two countries.

Observing that the traffic of Indians going to the US has been increasing over the years, he said 4,32,000 visas were issued in 2005 and the number last year stood at 2.2 million.

Of the total number of H1-B visas issued by the US, 60 per cent are issued in India alone, he said, adding it speaks about the volume of people moving from India to America.

Earlier, the waiting period for visa appointments in India was 187 days, which was "unacceptable" between two democracies and open societies, Mulford said.

With the backing from Washington, the waiting period was reduced to an average of 10 days. In New Delhi, the waiting period is seven days, in Chennai eight days and in Kolkata four days, he said, adding "the real story is that we kept that under control."

However, in Mumbai the waiting period is still 36 days because of increase in demand. Efforts are underway to reduce it to less than 20 days, the ambassador said.

I found a website which is a better source to provide better services about the green Card process in US. It helps the people to get green card in easy and short time.